Cell migration in the fish brain: a duel between Notch and FGF signaling 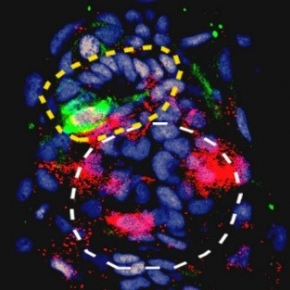 Many animal cells must move through the body from the place they are born to where they are needed, for example, when embryos are developing or wounds are healing. Often cells migrate in groups, which helps them to navigate and co-ordinate more effectively. Cells typically migrate by sensing different signals across large areas, and groups of cells communicate with each other to co-ordinate their migration.

One group of cells that is studied to understand collective cell migration is found in the brain of the zebrafish. These cells are called parapineal cells and, in the developing fish, they move towards the left side of the brain under the influence of a signal called Fgf8. Although all parapineal cells can detect Fgf8, only those at the front of the migrating group respond to the signal. These are the cells that lead the migration. It was previously unclear how the capability of responding to Fgf8 is limited to only a few parapineal cells to ensure they all migrate correctly.

These results provide a general model for how cells migrate as a group. More studies are needed to see if similar mechanisms are involved in other examples of collective cell migration. This model of group migration could be applied to healthy processes such as embryonic development as well as examples of cell migration in illness such as cancer metastasis.