Three amino acids make all the difference between the two isoforms of histone H2A.Z 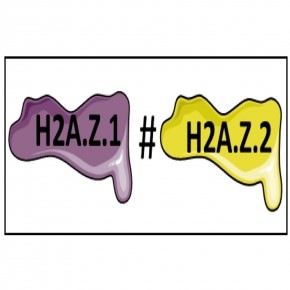 In chromatin, DNA is associated with different proteins, including histones and their variants that are involved in many cellular processes. The histone H2A.Z variant plays a major role in controlling gene expression. H2A.Z is encoded by two genes expressing two isoforms, H2A.Z.1 and H2A.Z.2, which differ by only three amino acids. In this article published in the journal Elife, Didier Trouche's team at LBCMCP shows that these isoforms can have similar but also antagonistic functions, by interacting with proteins that interact preferentially with one or the other. These results add an additional level of complexity to gene control by histone variants.