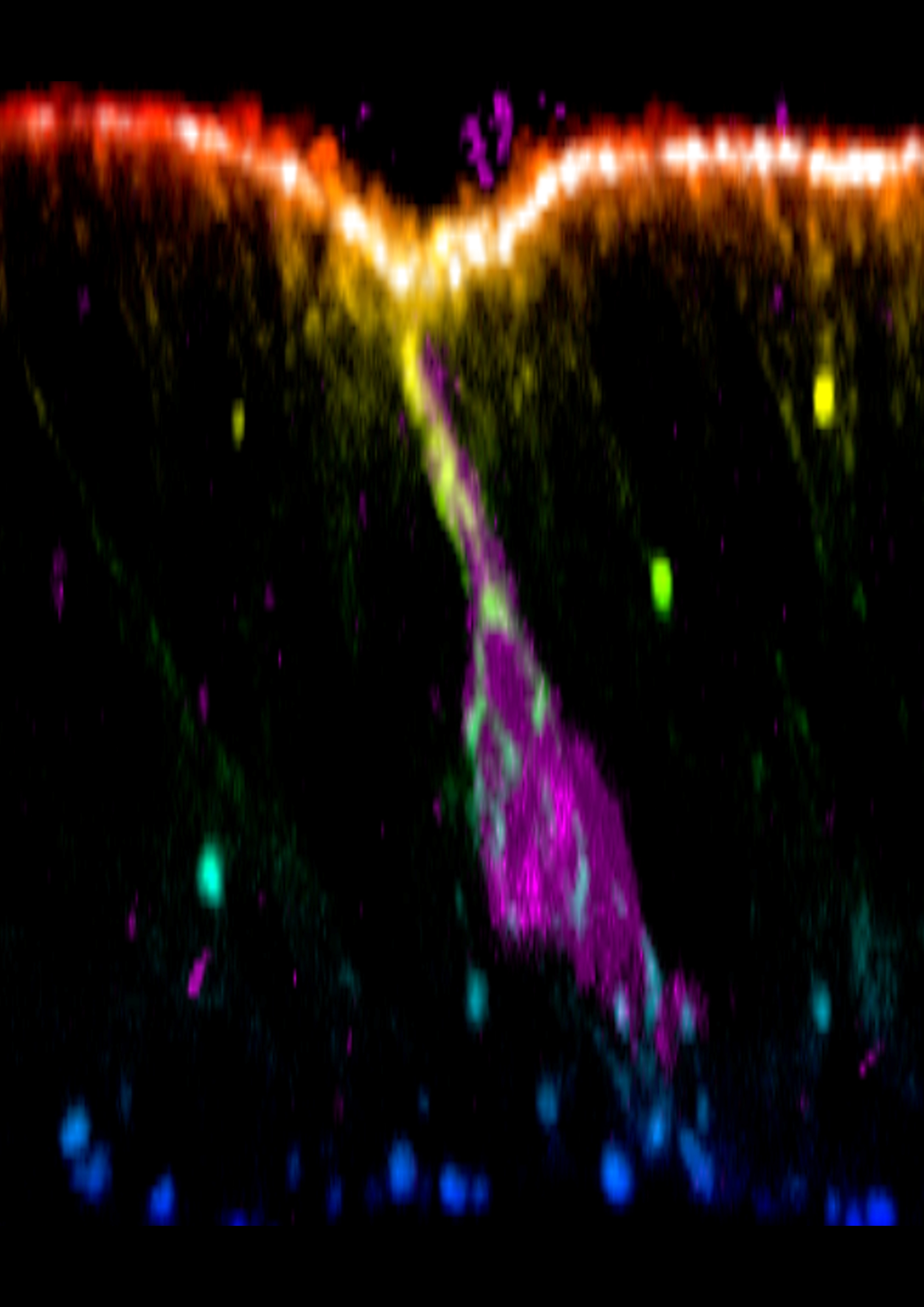 Apoptosis as an active player in morphogenesis

Pioneer studies on apoptosis reveal the surprising importance of cell death during normal development in a number of different organs and organisms (Fuchs Y. and Steller H., 2015). Initially, apoptosis was simply viewed as a way to get rid of cells without considering its potential influence on the surrounding tissue. More recently, it has been suggested that apoptotic cells play an important dynamic role during morphogenesis (Toyama Y. et al., 2008;  Suzanne M. et al., 2010; Ambrosini A. et al., 2016). Nonetheless, the mechanisms whereby dying cells drive tissue shape modification was unknown. Using the Drosophila developing leg as a model system to study apoptosis-dependent epithelium folding (Manjon C. et al., 2007), we showed that apoptotic cells produce a pulling force through the unexpected maintenance of their adherens junctions that serves as an anchor to an apico-basal Myosin II cable. The resulting apoptotic apico-basal force leads to a non-autonomous increase in tissue tension and apical constriction of surrounding cells, leading to epithelium folding. These results reveal that, far from being passively eliminated as generally thought, dying cells are very active until the end of the apoptotic process (Monier B. et al, Nature , 2015).

Based on this discovery, our objective was to understand how apoptotic cells influence their surroundings from the micro-environment to the macro-scale level and characterize this new regulator of mechanical forces in morphogenesis. We first dissected the cellular mechanisms governing the generation of the apoptotic force and identified network of genes orchestrating apoptosis dependent morphogenesis through a genetic screen. In parallel, we asked if the force exerted during apoptotic cell delamination was specific to apoptotic cells or share with other type of delaminating cells. To tackle this question we analyzed the dynamic of cell delamination during epithelial-mesenchymal transition. To perform this work, we combined state-of-the-art live imaging techniques, together with robust biophysical modelling. Finally, we developed a number of new tools to bypass the technical limitations identified in our model system.

We recently characterized the cellular mechanism necessary to generate the apoptotic force in Drosophila tissues:

Mechanical forces have been extensively studied in the plane of the epithelium. While forces generated along the epithelium apico-basal cell axis have recently emerged as essential for tissue remodelling in 3D, the cellular machinery involved remain poorly described. We found that, during Drosophila leg folding, cells eventually committed to die produce forces through the formation of a dynamic actomyosin contractile tether connecting the apical surface to a basally relocalized nucleus. The nucleus anchored to focal adhesions by a basal F-actin network constitutes an essential component of the force-producing machinery. Thus, this work reveals that the nucleus, in addition to its role in genome protection, actively participates in mechanical force production and connects the contractile actomyosin cytoskeleton to basal junctions.