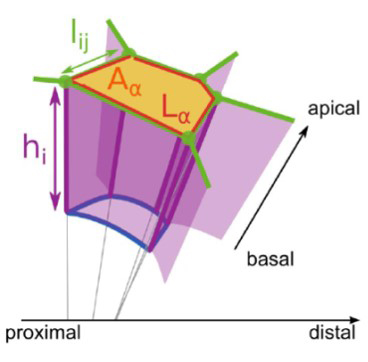 The tyssue Python library seeks to provide a unified interface to implement bio-mechanical models of living tissues. Its main focus is on vertex based epithelium models. tyssue allows to model the mechanical behavior of 2D, apical 3D or full 3D epithelia based on the numerical resolution of the equations of motion for the mesh vertices. We contribute to the development of this library that has been developed by Guillaume Gay from the Turing Center in Marseille.

To test the role of apoptotic forces in folding, we elaborated a physical model based on the 2D vertex model. In the absence of the apoptotic dependent forces, the model indicates that the simple disappearance of 30 cells from a continuous ring-like domain is not sufficient to induce cell shape reorganisation and to create an invagination at the tissue level.

However, if a transient apico-basal force is applied in each dying cell, an invagination response is observed all around the cylindrical tissue, albeit irregular. Now, if an increase of apical contractility is applied in two rows of apoptotic neighbours (representing the non-autonomous increase in tissue tension), a cell shape reorganization is observed, although moderate.

Finally, if the transient pulling forces generated at a cellular scale are translated as increased contractility at the tissue scale we observe cell shape reorganisation similar to that observed in the leg fold, along with regular and deeper folding. This shows that the added effect of both apoptotic forces is necessary and sufficient to induce folding in silico.

We observed that developing leg folding occurs in a mechanically noisy environment. To test the impact of mechanical perturbations on fold formation, we implemented our previous model of developing leg folding and integrated random mechanical perturbations in close vicinity to the predicted fold domain, mimicking the mechanical noise observed in vivo. Interestingly, we found that mechanical noise appears sufficient to induce fold deviations in the simulations, mimicking the absence of Myosin planar polarity in the tissue.

We then wondered whether restoring myosin II polarity in a non-polarized tissue could rescue the defects of fold deviation. Although not feasible in vivo, we could address this question using in silico modeling, asking whether fold deviation caused by local mechanical perturbations could be rescued by the introduction of planar polarized junctional myosin II. In order to integrate myosin II planar polarity in the model, we mimicked myosin II planar polarity and the associated tension anisotropy by the attribution of different values of junctional tension depending on junction orientation in our model. Fold robustness was unaffected by the integration of tension polarity in the model in the absence of external perturbations, while interestingly, gradual increase of tissue polarity favors fold straightness and insensitivity to surrounding perturbations. We further quantified fold morphogenetic robustness in our theoretical model for different degrees of polarity. Interestingly, increasing polarity decreases the degree of deviation of the fold and thus decreases the variability in fold directionality, supporting the fact that the planar polarization of tissue tension favors mechanical isolation of fold formation, which ultimately ensures morphogenetic robustness.

In drosophila imaginal tissues, we found that at the onset of EMT (in a controlled inducible system), cells generate myosin II-dependent apico-basal forces while constricting their apex and pull down transiently the apical surface of the epithelium, before delaminating. At the tissue scale, ectopic EMT appears sufficient to drive ectopic folding, suggesting that the force generated by predeliminating cells constitutes a driving force for tissue remodeling. We further found that similar apico-basal structure are formed in cells from the mesoderm in Drosophila embryo and that an apico-basal force appears essential for mesoderm invagination. To test specifically the contribution of apico-basal forces generated by pre-delaminating cells  in tissue folding, we developed a physical model of the embryo apical junction network based on the vertex model we implemented recently. This 3D model of mesoderm invagination mimicks the cellular dynamics observed in the embryo (anisotropic constriction, gradual and asynchronous apical constriction, and apical force propagation). In this model, mesodermal cells progressively constrict their apical surface preparing their future delamination. Simulation results showed that apical tension alone without apico-basal force only leads to a curved-shaped mesoderm, independently of the strength of apical contractility. Only in the presence of apico-basal tension does the mesoderm invaginate, forming the V-shape observed in vivo. 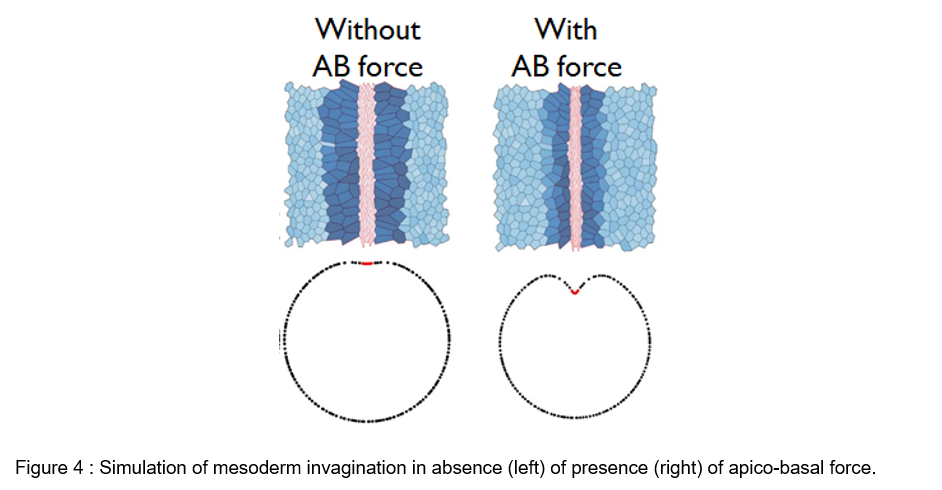