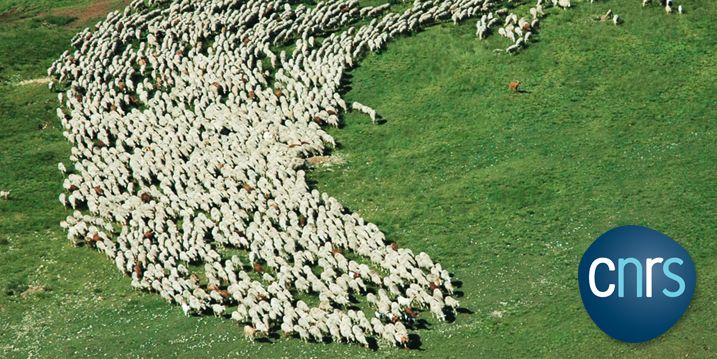 A wide spectrum of biological systems exhibits collective motion, including bacteria colonies, migrating locusts, schools of fish, flocks of birds, and groups of mammals (including humans). Each system is characterized by its own specific interaction rules between its constituent units, from which coordinated motion patterns emerge. In this project we investigate the behavioral interactions that govern these collective phenomena at different scales in groups of sheep. We use an approach that tightly combines experiments and modeling to characterize interaction rules and to better understand how groups of moving organisms respond to external signals or perturbations.

Imitation is a key component of a large variety of collective phenomena in group-living animals. To better understand the role of imitation in groups of animals, we performed experiments and analyses on the collective movements of sheep either while spontaneously grazing or when submitted to experimentally triggered departures.

A collaboration with the University of Nice allows us to reveal that two kinds of collective decision operate when sheep are submitted to triggered departures. Either the sheep all abide by the initiator or they all stay at the same place. The last case illustrates the effect of inhibition of non-moving/feeding animals and reveals that imitation depends on the duration of social stimulus (a conspecific moving away). Besides, the decision to follow and to stop can be described by the same kind of non linear dynamics, with a conflict between the stimulation exerted by the group members moving away and a retention exerted by those that are motionless (PLoS ONE, 10: e0140188).

We showed that sheep in large groups alternate between phases of slow dispersion and phases of rapid gathering. This work, conducted in collaboration with the University of Aberdeen and the University of Nice, reveals that gathering is similar to an avalanche-like phenomenon with a scale free amplitude. A model also shows that imitation plays a key role in the capacity of the groups of sheep to maximize the area exploited while at the same time minimizing the time needed to gather (Proceedings of The National Academy of Sciences USA, 2015, http://www.pnas.org/content/112/41/12729.full).