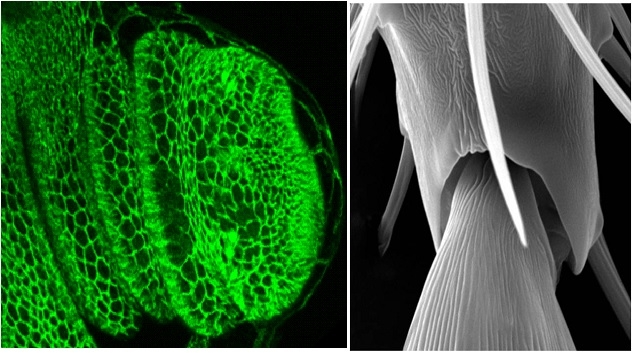 In the team, we are focusing on apoptosis-dependent epithelium folding. Apoptosis is one of the basic cellular processes taking place during epithelium remodeling together with cell division, intercalation, and delamination. Apoptosis has long been known to be required for diverse morphogenetic events. Primary studies revealed an essential role of apoptosis in digit individualisation in the vertebrate limb, demonstrating the importance of cell elimination in shaping organs. Hence, the mechanism of shaping organs and body structures through apoptosis has been viewed as a simple elimination of cells carving new tissue forms. However, these previous studies fail to explain the cellular mechanisms underlying apoptosis-dependent epithelium folding involved, for instance, in vertebrate neural tube closure and presumptive leg joint formation in Drosophila. Thus, restricting the role of apoptosis to the sole elimination of supernumerary cells during morphogenesis is insufficient to explain the impact of apoptosis on epithelium folding. Indeed, to induce a fold in a monolayer epithelium, apoptotic cells must create a non-autonomous effect on their living neighbouring cells, the mechanism of which has remained totally unknown.

In the lab, we use an in vivo approach to study a naturally regulated apoptosis event essential for epithelium folding during Drosophila leg development.

Our model has the following advantages: (1) apoptosis is naturally induced, (2) the phenotype associated with apoptosis alteration is easily visualised under a stereomicroscope, (3) apoptosis occurs in a restricted domain and in an extremely stereotyped manner which facilitates the follow-up of its consequences on the surrounding tissue, (4) ex vivo culture of leg tissue enables precise live analysis of cellular and sub-cellular dynamics and tissue tension generation and transmission with high resolution.

In parallel to this biological approach, we are working in collaboration with a biophysics company, DAMCB (http://damcb.com/; Data Analysis and Modelling for Cell Biology) in order to elaborate a 3D biophysical model of epithelium folding. Therefore, the involvement of each cellular process observed in vivo in an integrated tissue can be tested independently and importantly, can be generalised through a theoretical model.

Our goal is to dissect the cellular mechanisms, with a global vision of the tissue and cells in 3D, and gene networks involved in apoptotic force generation and transmission, which will finally lead to epithelium remodelling and folding.