Based on live fission yeast analysis, we developed a mathematical model of mitosis describing the process of chromosome bi-orientation.  A simple nano-machine spindle based on biased stochastic process of kinetochore microtubule attachment and detachment events can provide universal features of chromosome segregation and genomic stability. Schematically, in vivo and in silico, the two spindle poles nucleate interdigitated microtubules (idMTs) and kinetochore microtubules (ktMTs) (idMT in orange, ktMTs in blue). The ktMTs are attached to the chromosomes through multiple microtubule attachment sites (purple). In fission yeast, a maximum of four sites are present on the kinetochore allowing the possibility of the chromosome to become merotelically attached (ie. One kinetochore is attached to both poles). In metaphase, the cohesin complex (pink) links together the two sister chromatids until its degradation at anaphase A . 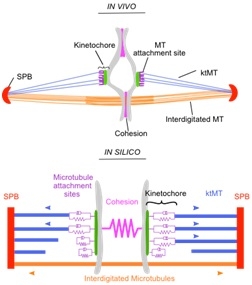 It is well established that multiple molecular motors are present on the spindle or the kinetochores. Altogether, these motors are modelled as a single linear force velocity relationship applied on the ktMTs or the idMTs. These forces can push the poles apart, trigger chromosome movement and spindle elongation (orange and blue arrows).

We also implemented Aurora B activity that promotes ktMT destabilization in the absence of tension between sister chromatids. The function of Aurora in chromosome bi-orientation was directly tested in vivo using analogue sensitive versions of Ark1 (ark1-as3). When Ark1 is inhibited, chromosome segregation is severely compromised. Cells either displayed single sister chromatids remaining stretched in between the two poles (merotelic) or sister chromatids moving to the same pole (syntelic attachment,). Quantification of these defects revealed that the percentage of both merotelic and syntelic attachments increased with the degree of Aurora inhibition. Our model is sufficient to reproduce the in vivo dynamics of breathing sister kinetochores during metaphase with reasonable accuracy. In addition, our model is implemented with sophisticated correction mechanisms to prevent most of the attachment and segregation defects at anaphase onset.