Previously, we have studied regulatory element required for the expression of the zebrafish proneural gene neurogenin1 (neurog1) (Blader et al., 2004). We are now addressing how this bHLH transcription factor regulates its targets. Indeed, we have shown that Neurog1 regulates its target deltaA via three non-redundant E-boxes (Madelaine and Blader, 2011). 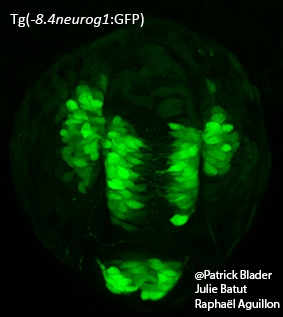 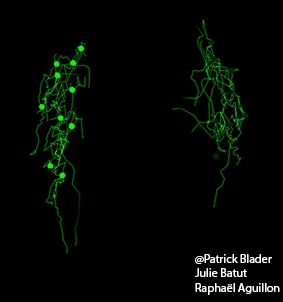 ebrafish olfactory system, dispersed precursors of olfactory neurons differentiate while concomitantly assembling into a compact placode on either side of the brain. We have already shown that the bHLH proneural Neurogenin1 (Neurog1) plays a key role in olfactory neuron differentiation (Madelaine et al., 2011). How morphogenesis of the olfactory placode is coordinated with neurogenesis, however, remains unclear. In the lab, we aim to decipher how these processes are coupled to build a functional sensory organ using both live imaging and molecular/transcriptomic analysis.

We have quantitatively described the early steps of olfactory placode morphogenesis and can show that these parameters are disrupted in neurog1 mutants. This process seems also affected in some cell-migration molecules/ guidance cues mutants, which in this system could act as Neurog1 direct target genes. We plan to unravel Neurog1 direct target genes involved in this process, by identifying E-boxes’s cluster within regulatory elements that could control their expression in a Neurog1-dependant manner.

We are using both conventional candidate promoter analyses and CRISPR/Cas9 genome editing tools to investigate the function of these E-boxes in controlling candidate gene expression in the olfactory placode. Altogether, our results could reveal a parsimonious mechanism for coordinating neurogenesis and morphogenesis in which proneural genes control both processes via distinct sets of targets.