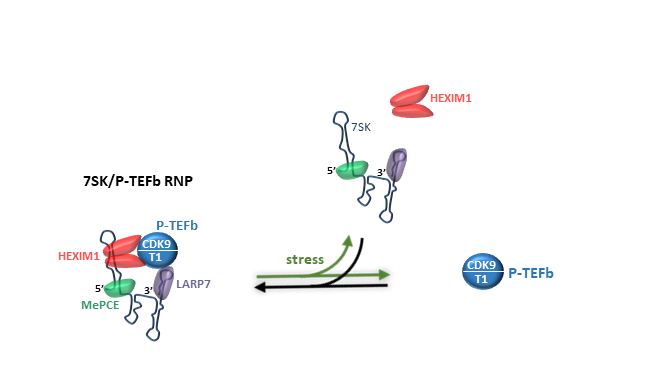 Controlling the elongation capacity of RNA polymerase II by the positive transcription elongation factor b (P-TEFb) is a prominent regulatory step of eukaryotic gene expression. The nuclear activity of P-TEFb is controlled mainly by the 7SK snRNP that sequesters active P-TEFb into transcriptionally inactive 7SK-P-TEFb particles. Through controlling the nuclear level of active P-TEFb, the 7SK snRNP functions as a key regulator of global mRNA production, cell growth and proliferation. The 7SK snRNP is an important tumor suppressor. Compromised P-TEFb-binding capacity of 7SK snRNP leads to malignant transformation of cultured cells and it has been linked to cardiac hypertrophy, lymphoma, leukemia, various cancers as well as to inflammatory and autoimmune diseases. Understanding of the complex transcriptional regulatory function of the human 7SK snRNP is a major goal of our work.