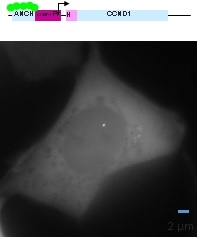 The spatial organization of chromatin in the nucleus is non-random and chromatin dynamics participate in regulating nuclear processes from gene expression to DNA repair. Transcriptional activity has been correlated with relocalisation of gene loci within the cell nucleus. However, we do not know whether changes in transcription per se alter motion of the underlying chromatin fiber.

We use estrogen inducible loci in human mammary tumour cells as a model system in which chromatin remodelling via looping allows priming of the gene environment for transcription activation. We mapped chromatin folding over several hundred kb around estrogen responsive genes using 3D DNA and RNA FISH and confronted these measurements with 5C data to establish models of domain organization which are cell type specific. Our results indicate that rapid estradiol induction of gene expression occurs in the context of pre-existing chromosomal architectures that become stabilized in response to estradiol signalling. Using the non-invasive ANCHORTM method to label DNA for imaging chromatin in living human cells, we simultaneously observe mobility and transcription of  single, hormone-responsive genes. We observe that transcription initiation locally reduces chromatin dynamics within minutes.

This project aims at visualizing gene expression at single molecule level in the nucleus of eukaryotic cells. To reach this goal, we develop superresolution microscopy (PALM, STORM) and collaborate with the Gadal group.

In addition, we have estabilegd a team at ITAV. The goal of the ANCHOR team is to develop new applications for a live cell DNA biosensor technique based on our recently patented system to investigate several DNA processes. The ANCHOR system is a bipartite system composed of ANCH sequences and OR proteins. ANCH DNA sequences are specifically and independently recognized by OR proteins that nucleate and spread from the ANCH sequence over surrounding DNA. As the OR proteins can be fused to a fluorescent reporter, increased concentration of OR on the ANCH DNA creates a fluorescent focus easily detectable by fluorescence microscopy.  We are applying this technology to uncover DNA-based molecular mechanisms in single cells and in high content screening by microscopy on living cells to discover active molecules with broad applications, from bio-production to antiviral activity. We collabroate with the start-up NeoVirTech (www.neovirtech.com; jeune entreprise universitaire headed by Franck Gallardo, postdoc in the BYS group until 2013).